These are (as far as I can tell) five different bee species, and they’re all asleep — or at least resting.  All these photos but one were taken in the same meadow in the mountains of Montana, within a few minutes of each other.  It was around four in the afternoon, and the weather was getting stormy, so I stopped fishing (holding a graphite fly rod up in the air when there’s lightning nearby isn’t a good idea).  The wind had come up, thunder was booming higher up the canyon, and the sun was obscured by clouds.  I noticed that although many flowers had bees on them, none of the bees were feeding or collecting pollen.  Despite the sudden storminess, the weather was still warm — the temperature was in the high 70s F — and in July in Montana, the day is far from over at four p.m.  Nonetheless, no bees were busy.  They were all just sitting there, one to a flower, as if taking a siesta while waiting for the weather to improve.  I don’t know what cue caused the behavior — maybe a quick change in the air pressure, or the lack of sun, or the sudden wind, or maybe a combination of factors… in any case, they didn’t move at all on their various floral perches despite my leaning close with the camera.

The fifth image (the bee gripping the plant stem in its jaws) was taken the next day under virtually the same weather conditions and at almost exactly the same time of day, in another streamside mountain meadow a few miles from the first location.  This bee really is asleep — a number of species of bees exhibit this behavior.  You’ll note it’s not gripping the stem with anything but its jaws.  And it was quite immobile — even when I carefully plucked the stem and moved it behind a boulder out of the wind, to improve my chances of getting a good photo, the bee didn’t stir.

When I was a kid, I hated to fall asleep quickly.  I liked lying in bed in the dark, wondering random childhood wonderings — like, whether bugs slept, too.  Now, I lie awake in bed in the dark because, well… at a certain age I found that falling asleep quickly was unlikely, whether or not I had something to wonder about.  I’m a little jealous of the bees; it must be nice to be able to sleep whenever you need to wait out a storm.

But do they dream?  I wonder. 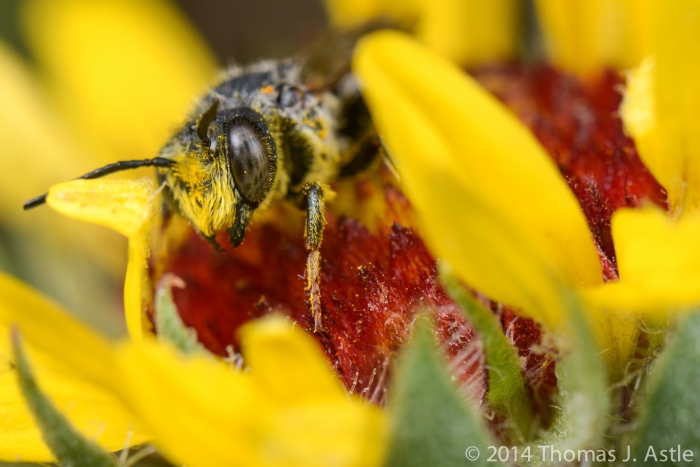